Michele de Winton stops by for a guest post! And some cake...

Today, the talented Michele de Winton is guest posting! Yay!!   I'm so excited... her July Indulgence The Boss and her Billionaire is out. A must read. Don't you just love her cover?

Ladies and gentlemen, I give you... Michele de Winton :) 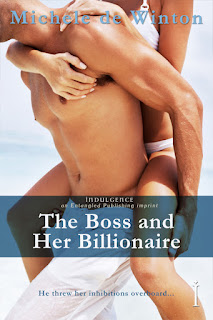 
Now those are two words that go together well don’t they? Just like tall and handsome, fair and fey, dark and swarthy. Me, I like my heroes in all sorts of combinations, but chocolate colored eyes, man they’ll get me every time.


Hi, I’m Michele de Winton and I believe that chocolate can solve almost everything. Okay, so maybe not world peace, but it would make a dent in world hunger, and it would certainly help if you were fainting from seeing Johnny Depp in person.


I wrote a post a while ago about chocolate brownie and despite the fact this might label me a baking junkie, I’m going to talk about cake.  Chocolate cake.


I’m not sure what it is about those two words that make most people smile, maybe it’s the thought of the moist crumbling texture of the sponge, or the creamy buttery spread of the icing. But chocolate cake is something that every girl (and boy) needs. At least once in a while.


This is actually a Vegan Chocolate Cake recipe. My husband laughed at me when I told him he’d like it. But then he ate it. And he loved it. Don’t write it off because of its lack of butter – you can add that in the icing if you want ;-)


1 and three quarter cups of flour


1 and half cups of sugar


Half a tsp baking soda


Half a cup of cocoa


Add three eighths(ish) of a cup of oil, 1 tbsp golden syrup and 1 cup of soy (or ordinary) milk.


In The Boss and Her Billionaire Michaela isn’t tempted by Mr. Chocolate. Not so her BFF Felicity:


“It helps having an Adonis to keep all the ladies happy,” Felicity drawled. “Poor guy.”


Michaela spotted Dylan. “He’s hardly suffering. Look at him playing the crowd. I don’t think we need to worry about him.” He was dancing with an elderly woman, her face flushed and her hair a frizz, but the smile on her face said she was having the time of her life. The two of them were surrounded, a circle of women looking on eagerly. “Jesus, they look like they want to eat him.”


“They probably do. It’s the same downstairs. Mr. Chocolate has his very own fan club crushing the purser desk. It’s causing a bottleneck, ’cause no one wants to be served by anyone else. We might have to throw some acid at his face or something.”


Michaela snorted. “Maybe you need to take him off the desk and put him on backroom duty.”


“Now you’re talking. He could be my paperwork slave.”


What about you? Do you like your men dark and swarthy or fair and fey?


Michele de Winton loves sunshine, chardonnay, (preferably together), beaches, trees, great vegetarian food, steamy writing and happy endings. She’s been known to be an all round arty type and it's no wonder that her first romance has a little sparkle of the stage tucked into its pages.  Being a writer was not was she was supposed to be when she ‘grew up' but then neither was being a dancer. Sometimes her performing past jumps out of the dress up box and requires attention. But most of the time she’s content to stay in her PJs. All day. And she also thinks that chocolate can solve pretty much everything. You can get in touch with her at


The Boss and Her Billionaire


Cruise director Michaela Western has everything she wants—everything except a sex life. But there are no secrets on cruise ships. She risked her job once for a dalliance with the Captain, and won’t do it again for a few minutes of toe-curling pleasure. Until a devilishly handsome new staffer with a body made for sin tempts her to walk on the wild side...

Investment billionaire Dylan Johns always gets what he wants. He is used to giving orders—not taking them—until he’s forced to go on hiatus from his investment company. To bide his time and carry out an old dream, he takes a job on a cruise ship—and ends up taking orders from his gorgeous, but uptight, new boss. He is determined to loosen her up with a fun onboard romance, but their no-strings fling turns serious and Dylan is forced to confess his lies.

When the affair threatens to shatter Michaela’s own career dreams, she finds herself caught between the devil and the deep blue sea.

The Boss and Her Billionaire is available now from


and Barnes and Nobel http://www.barnesandnoble.com/w/the-boss-and-her-billionaire-michele-de-winton/1112120207

Thank you for the lovely blog post, Michele. Time for some chocolate cake as I finish reading The Boss and Her Billionaire :)))

Posted by Carmen Falcone at 7:42 AM